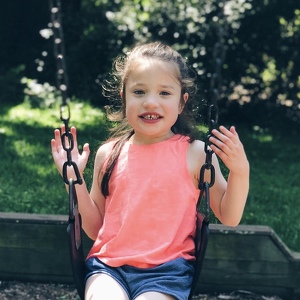 Our goal with this page is to raise money to go directly to research working to find a cure for Rett Syndrome. 100% of the funds given through this page will go directly towards finding a cure. We hope that you will join us on this mission to find a voice for the voiceless! To find out more information about our mission, you can visit EvelynsVoice.com

This is Evelyn. You can find her most days smiling and laughing, watching movies, eating pasta, giving endless kisses, praising Jesus, and wandering outside with her little brother.  She is the most fun, kind, loving, and selfless girl you could ever meet.

Evelyn was the sweetest and most beautiful baby right from the start-always so curious and content to simply observe her surroundings. She was immeasurably more than we prayed for. During the first year of her life she did most of the "normal" baby things-cooed, smiled, cried, laughed when we made faces, mimicked the sounds we made and the words we said. She bobbed along to her favorite songs, loved all things musical, played with her toys and loved reading her books. She did not show much interest in crawling, but she was always so happy so we were patient while she took her time.

It wasn't until her first birthday came and went that we began to truly become concerned with Evelyn's delays in development. The developmental gains that she did have slowly, and almost unnoticeably, began to regress.  She was a later crawler (14 months) and was making no effort to stand or take steps. By 18 months her vocabulary-dada, mama, cracker, book, chicken, bye bye, Jesus and a plethora of other words-had all but diminished to mere sounds and she communicated primarily through eye contact. By the age of two she didn't show much interest in her toys anymore and not long after that she stopped flipping through her beloved books on her own. The birth of our son, Ellis,  really started to put things into perscpective for us.  It became near impossible to avoid comparing the two and their differences in development.

Evelyn was in physical therapy, occupational therapy and speech therapy-we were working diligently to regain what was once there. We kept telling ourselves that one day it would just click and all come back to her. Amazingly, and out of nowhere, at 26 months Evelyn took her first unassisted steps (hasn't stopped moving since). We thought, this is where it will all take off, first she will walk, then she will start talking again (maybe in full sentences), and maybe even start using utensils to eat! However, that was not the case. For the rest of her second year we sort of just maintained our status quo-she seemingly leveled off in her walking, talking and feeding herself. Evelyn started preschool at 2.5 with our hopes, and prayers, that being around her peers would motivate her progress. Although, she loved going to school and spending her days with her friends she remained her sweet self, content in the season that she was in, wandering around her friends as they did their activities, occasionally laughing or stopping to sweetly place her hand on a friend letting them know she was there . The only thing that seemed different was that she started biting her hands when she was excited, upset, or happy.

At three years old Evelyn was diagnosed with Autism, she started a special needs program at our neighborhood school, and with a few transitional bumps melded right into her new  routine. With the start of her new school we did notice that Evie began breathing fast and shallow, almost hyperventilating, when she would get anxious or excited. Along with this new breathing pattern came a severe and rather taxing change in her bedtime routine-Evelyn would be up late into the night, restless and sobbing, exhausted but unable to fall asleep. One day after school Evelyn started to have what we thought were seizures that would end with her falling flat on her back after each one. A trip to the emergency room, a 24 hour EEG and an EKG later resulted in (the EEG showed no seizure activity, although the it was abnormal) a neurologist coming into Evelyn's hospital room suggesting that these patterns could be indicative of a genetic disorder.

One week later, after her MRI came back normal, a geneticist, a genetic counselor and Evelyn's developmental pediatrician diagnosed our sweet Evie girl with Rett Syndrome. Our hearts dropped but our prayers were answered. We have a name, we have a direction and by the grace of God we have a healthy and incredible little girl. We are blessed  beyond measure with our sweet girl and our amazing little God-send, Ellis, who even at one and half is already such a help and champion for his big sister.  We all have the divine privilege to walk alongside Evie as she bravely, and without pretense, glorifies His name on our journey to help find a cure. Even if we don't see a cure in her lifetime that is okay too, for she will do wonderful things regardless.