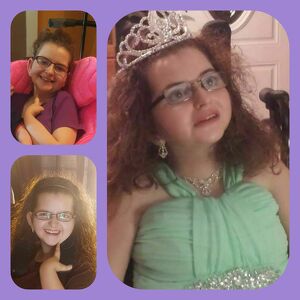 Thank you for visiting my page! I am excited to share about my journey with Rett Syndrome.

I wasn't convinced and decided to seek out yet another doctor for Amanda. So we went to Houston and saw Dr. Daniel Glaze. I told him I needed answers to all my questions, and explained our situation. Dr. Glaze then looked over Amanda's records, after which he ran some of his own tests, and some more blood work. He then told me he'd let me know the results as soon as he could. We anxiously awaited the results, and were astonished when they came in and her new Doctor gave us the results. His tests had proved conclusively that Amanda did indeed have Rett's Syndrome!
>
Since then things have been a little easier, if nothing else we have the peace of mind of knowing without a doubt what my daughter has. And she now has someone who is treating her properly according to her needs.
Amanda was enrolled as one of 30 girls participating in a double-blind placebo-controlled treatment study that is testing new medications that may be used for the treatment of Rett's Syndrome. This Study is being conducted by the Baylor College of Medicine in April of 2000. To date she has been participating in this study for about nine months and we have noticed some improvements. Most of all Amanda is more vocal and observant now than ever.
I consider Amanda to be one of the best things that has ever happened to me. She is my best friend and my very precious, special gift from God. Amanda's needs are my special needs. She teaches me daily about life, and not to take one precious moment of it for granted. We now treat every day as if it were our last, and thank God every day for our precious daughter Amanda.

There are no recent supporters to display.

There are no top donors to display.