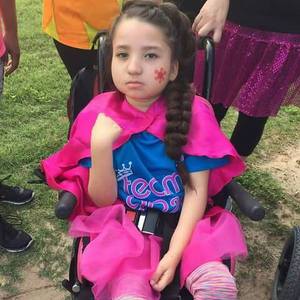 Thank you for visiting this page to show your support for our daughter!

On November 5 2007 my miracle was born. Since the beginning she has prove to be a fighter. Luz had meconium aspiration and unresponsive she was on the ventilator for the first three days of her life. She had an awesome team taking care of her. I thought I was going to loose her. Little did I know that this was the first obstacle our Luz would have to face. 11 days in NICU and finally we were able to take her home.

The months went by and Luz had trouble gaining weight we did not think anything about it since her doctor would say "its ok mom everything is proportional she is small all around look at dad he is small" so we figure ok lucky her. I never saw the signs of delay I figured she was fine. We had a boy already and just thought girls developed different. It was until about when she was 5-6 months that a co-worker notice that she wouldn't stand like all babies do at that age she would pick up her legs. She wouldn't hold her bottle, sit or do anything a baby would do by that age. I remember when I told her that Luz only weight 11 pounds she freaked out. She said you need to go talk to the doctor something is not right here.

When we talked to the doctor he was still in denial that something could be wrong with her he thought she was fine. All he did was give us a referral for physical therapy with a dx of milestone delay. I wish that was the problem. Well she was one and weighing a little over 12 pounds not sitting, crawling, standing, and so many other things. Ok referral for OT, ST same diagnosis. Then the referrals orthopedic, genetics, it took almost 8 months and lab work after lab work, test after test to mention a few CP, angelman syndrome, microcephaly, mitochondrial disease, protein levels, thyroid..... Every time we would have test done I would go home or work and google and of course cry thinking the results would come back positive. Results for everything would come back normal and I still had hope that nothing was wrong with her. That she was just a late, very late bloomer. It was then that she started with her stereotypical hand movements we would even joke about it that she was doing the John Cena hand gester. But no it was rett that was taking over my little girl she was loosing her purposeful hand use she was loosing her ability to play or hold toys. Rett took over her body before she was able to learn any skills. Our last referral was a neurologist we actually saw two. The second one luckily had some training done at Texas children's in Houston and was familiar with rett syndrome. With just observing Luz for about 30 min he knew something was not right. Towards the end of the visit he said " does she always do that with her hands? If yes I suspect she might have rett syndrome she has a lot of the characteristics. But of course we need to confirm that with some lab work. But he said "Medicaid does not cover for that test, I have another patient I want tested but the parents don't have the means to do it." We didn't either but we said we would get another opinion. We went back to the other neurologist and told her what they suspected she had, she said let's order the lab work there I go again reading the symptoms only this time it hit me harder because she had all the characteristics.

We waited about three weeks when we go the call that we needed to go in ASAP I already knew why on September 24 2009 our little Luz was finally diagnosed with Rett Syndrome it felt like the end of the world. The doctor just hugged us and I tried to be strong but I couldn't. I just heard its positive she has rett syndrome. My little girl all my dreams of ballet, cheerleading, dance, dating, wedding my mind went 100 miles per hour just seeing all the things she would never do. Oh and till this day I haven not received a bill from the lab, I wonder who paid for it? I don't know what I would of done with out the support of my co-workers at the time I cried and cried I didn't want to accept it. Right away I turned to the irsf website joined rett net and began our journey to get educated on how we could help our little princess have a better quality of life. Having the support from other rett families is what kept us going. In march 2010 we attended our first rett camp. It was very scary we didn't know what to expect. Seeing other rett girls and meeting families was the best thing we did. We finally accepted and moved forward. Since that rett camp I have dedicated my time to learn and raise awareness for Rett Syndrome. We have made wonderful friends that have seen our Luz grow. We will never give up hope until we have a cure for Rett Syndrome even if it doesn't happen in Luz's lifetime. It's sad but its reality our angels are here today but tomorrow is not promised. So please family and friends please take a moment to spread awareness. Rett does not discriminate and can knock on your door when you least expect it.

*In October 2012 Luz Started having seizures.

*In May 2014 Luz had Gastrostomy and Fundoplication.

*In June 2015 Luz was diagnosed with sleep apnea and started using CPAP machine.

*In July 2015 Luz was diagnosed with Scoliosis

*In October 2016 Luz had Tonsils and adenoids removed

to help with her sleep apnea.

*Due to her seizures being resistant to medication Luz will be getting a VNS implant in November 2016.

*March 2017 her Scoliosis is progressing and her curve in now 39 degrees. She will be monitored every six months.

*March 29, 2017 Its been four months since her VNS was placed and Luz continues to have daily seizures. We are praying that within a year of placement we will start seeing results.

Despite all the struggles Luz has had in her short life she continues to smile and inspire those around her. Please help us find a cure by making a donation in her honor.